“Mareeba Shire is a wonderful place to live, work and invest and the Mareeba Shire Council is committed to stimulating the local economy and enhancing the liveability for all residents across the Shire.” - Mareeba Shire Mayor Angela Toppin”

Our vision is to deliver for our community; a growing, confident and sustainable Shire.  We are committed to building our local economy, attracting visitors to the Mareeba area, enhancing the profile and liveability of the Mareeba region and fostering pride in our community for all residents.

Mareeba Shire is economically and socially diverse.  The Shire is ranked as the 6th fastest growing local government area in Queensland, with Mareeba now the largest town outside of Cairns in Far North Queensland, acting as a vital transport and services hub for Northern Australia, including Cape York Peninsula and Gulf of Carpentaria areas.

Mareeba Shire is in proximity to two World Heritage Areas, the Great Barrier Reef and Wet Tropics, and is less than an hour’s drive to Cairns International Airport. It stretches across the base of Cape York Peninsula, and comprises rural and remote agricultural communities, Indigenous communities, and tourism destinations.  The Mareeba Shire has a total land area of 53,502.0 km2, with an average daily temperature range of 18.7°C to 31.5°C and an average annual rainfall of 1,012 mm.

Upgrades to largescale infrastructure such as the water treatment plant and road transport routes, along with local government investment in industrial and commercial aviation parks, have created a sound foundation to support future growth for the Shire

The diversity of the Mareeba Shire which has access to reliable water, enables a wide range of high-quality produce to be farmed year- round.  The Gross Value of Agricultural Production for the Mareeba Shire in the financial year ended 30th June 2021, was estimated to be $362.06M. The value of the agricultural sector has increased by 13 per cent over the past five years, boosted by booming commodities including avocados, mangoes, livestock, sugar cane, citrus and blueberries.

The Mareeba Shire is one of the largest fruit producing regions in Australia, with horticulture making up 48% of the Shire’s agricultural production valued at $175.22 million for the financial year ended 30th June 2021.  The shire’s farmers and support services represent, in most cases, best international practice in farming in a tropical environment. Water supplied from Tinaroo Dam enables a tremendous range of fruit and vegetables to be grown to supply both the domestic and overseas markets. Significant expansions are occurring in some industries (avocado, citrus, and blueberries), new commodities gaining a foothold (table grapes, cotton) and traditional industries evolving with new varieties (mango and lychee).

The avocado industry is now the most valuable to the region, worth $47million and has increased rapidly since 2016 when it was worth $28 million. The Mareeba Shire, as part of North Queensland, is now Australia’s largest avocado growing region, with the largest production increase of all regions in Australia, growing by 47% in the 2021 financial year.  With many of the avocado trees in the Shire less than five years old, it is anticipated this industry will continue to show strong growth as these trees mature and reach peak production.

Livestock disposals including cattle and poultry are the second most significant industry, making up 36.58% ($132.45M) of Mareeba Shire’s agricultural production.  Mareeba is home to Queensland’s most northern beef cattle selling complex which has experienced solid growth.  The gross value of production (GVP) of the Mareeba Shire cattle industry was estimated to be $101.82M for the financial year ended 30th June 2021.

The Mareeba Shire also has a significant poultry industry, with both a Steggles processing and hatchery facility in Mareeba.  The gross value of production for the poultry industry in the region is approximately $30.63M.

The Mareeba region is rich in mineral resources including gold, lead, zinc and other base metals, tungsten, copper sulphate, tin, perlite, limestone, marble and slate, and there are a number of major mining operations within the Shire.

Mareeba Shire has been identified as one of the major renewable energy zones under the Queensland Renewable Energy Zone initiative to develop energy infrastructure to support future investment projects in this industry. The current projects in the region are:

There is a fledgling cotton industry emerging in the Mareeba Shire under the collective cluster of the Far North Queensland Sustainable Cropping Group.  Cotton is shaping as an alternative to other traditional crops like corn and sorghum, with an increase of plantings predicted to grow by up to 30 per cent.

The agricultural, forestry and fishing industry employs the highest proportion of the shire’s workforce than any other industry (16.9%) so it is not surprising that the most common occupations are managers (16.6%) and labourers (15.9%) (ABS 2016 Census).  The other top industry subdivisions of employment are; health care and social assistance (11.3%), retail trade (9.1%), education and training (8%), public administration and safety (7.4%), and construction (7.4%).

In June 2021 there were 10,807 people participating in the workforce in the shire with an unemployment rate of 7.7% which is slightly higher than the average for Queensland at 6.8% (QLD Government Statistician’s Office, June 2021).

The thriving Mareeba Industrial Park is the region’s largest agricultural services and logistics hub. Land is very competitively priced, and the park has attracted national companies in packaging and logistics, making $20M plus investments.  To keep up with demand, Council is continuing to invest in the expansion of the Park which has some of the most flexible land use opportunities in Queensland. 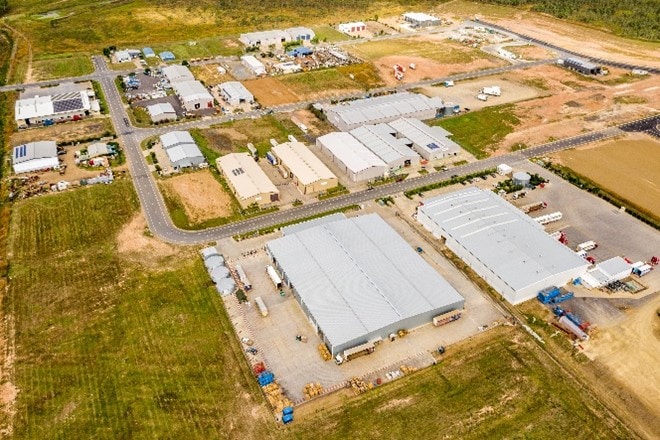 The Mareeba Airport Aviation Park is a unique location near a major international airport, yet outside controlled airspace, with a safe flying area and new infrastructure, which provides a real opportunity to support global growth of the aviation industry and the regional economy in Northern Australia. Located inland away from the coast, it offers a secure development opportunity with limited environmental management risks and an ideal flying climate.

Mareeba Airport is a CASA certified public aerodrome with a Code 3 sealed runway, AFRU, AWIB and PAL. The facility supports approximately 1,000 aircraft movements a month, and training accounts for approximately 50% of all landings. It is currently home to several flight training operators, aircraft maintenance businesses, agricultural aviation operators and recreational aviators. There are strong prospects for further growth in demand, with many existing users proposing to expand their operations over the next decade, particularly in relation to flight training. Mareeba Shire Council has engaged Economy.id to provide accurate and up to date profiles of the region’s community and economy.  This is recent data that is derived from official sources of information (Australian Bureau of Statistics) as well as Australia’s leading economic modellers, the National Institute of Economic and Industry Research (NIEIR).

Economy.id is an online statistical tool that draws on a variety of economic data sources to profile the characteristics of our local economy, how it compares to other areas and how it is changing. It is extremely useful in making business and investment decisions. It includes information such as Gross Regional Product, local businesses, employment, population, building approvals, industry structure, journey to work and much more.

By accessing the community profile, it is possible to better understand the story of the local community, how it is changing over time and how it compares to other areas.

These web sites provide up-to-date references and information for businesses and industry.